Titus 1:10-14, "For there are many unruly and vain talkers and deceivers, specially they of the circumcision: Whose mouths must be stopped, who subvert whole houses, teaching things which they ought not, for filthy lucre's sake. One of themselves, even a prophet of their own, said, The Cretians are alway liars, evil beasts, slow bellies. This witness is true. Wherefore rebuke them sharply, that they may be sound in the faith; Not giving heed to Jewish fables, and commandments of men, that turn from the truth."

Kindly said, when I attended the Campus Church at Pensacola Christian College (PCC) during the summer of 2021, I was horrified as I sat and listened to Pastor Timothy Zacharias tell thousands of people that if their behavior hadn't changed, they weren't saved. It was on July 14th, 2021 at a Wednesday night Bible study. It is bad enough that Campus Church and PCC sinfully bid Godspeed to false prophet Ken Ham, with his 3-ring clown circus of false Young Earth Creationism (YEC). But then on top of that the guy preaches the Devil's lie of Lordship Salvation, requiring people to repent "OF YOUR SIN" to go to Heaven.

Dear reader, not one verse in the inspired King James Bible teaches to turn away from your sinful ways to be saved. Christ came into the world to die for man's sins (Luke 19:10, "For the Son of man is come to seek and to save that which was lost"), not require us to keep the law to be saved. Turning away from your sin is the exact equivalent of keeping the law to be saved, which is heresy (Romans 3:19-20). You simply come to God as a guilty needy sinner, and put your childlike trust in the Good News (Gospel) of Jesus' death on the cross, burial and bodily resurrection three days later (1st Corinthians 15:1-4), and that's it, you are eternally saved!!! ONCE SAVED, ALWAYS SAVED (OSAS)!!!

Ignorant people will take what I just said and run to the opposite extreme, claiming that I said it is okay to live in sin. I didn't say that. The Bible plainly teaches that now that we as God's redeemed children are no longer under the law, we are still expected to keep the law; NOT TO BE SAVED OR PROVE THAT WE ARE SAVED, but simply because it is the right thing to do. Romans 6:14-15, "For sin shall not have dominion over you: for ye are not under the law, but under grace. What then? shall we sin, because we are not under the law, but under grace? God forbid." So you see, the free grace crowd (preachers like me) are not saying that it is okay to continue living in wild sin, but I am saying that if you do, it won't affect your salvation one iota, because salvation is of the Lord (Jonah 2:9). Salvation is not a reward for the righteous; it is a gift for the guilty! Salvation is not doing your best, it is having Christ's best put to your account through receiving Him by faith.

On July 14th, 2021 I heard Pastor Tim Zacharias teach thousands of people that, and I quote verbatim: "Repentance is a change of mind which results in a change of behavior." Liar, liar, pants on fire!!! Here is PCC's Campus Church screenshot from their Foundation's Class, which every new church member must watch to join their church. I put that cancellation symbol over the message, lest some poor soul think this is the truth, which it is not... 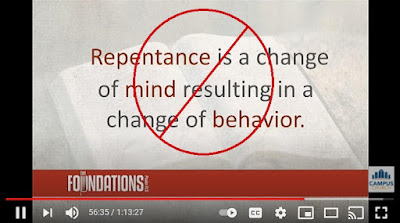 I kindly contacted their senior pastor, Jeff Redlin, the very next morning, very concerned about the blatant false teaching I had just heard and seen the night before at his church. Sadly, Pastor Redlin defended Tim Zacharias' false doctrine, but went even further, telling me that he fully agreed with the damnable heresy!!! I quickly realized that I had just started attending a religious cult that preaches Calvinism (i.e., the perseverance of the saints, which says if your behavior hasn't changed you didn't really get saved). SHAME on these ungodly pastors!

Kindly said, there is something WRONG with Pastor Jeff Redlin. His heart is cold toward doctrinal error. Redlin didn't even think twice to defend Pastor Zacharias heresy, showing me that Redlin is a coward, afraid to stand upon his own two feet. It also shows me that Jeff Redlin is loyal to men and institutions, rather than to God and truth. ... 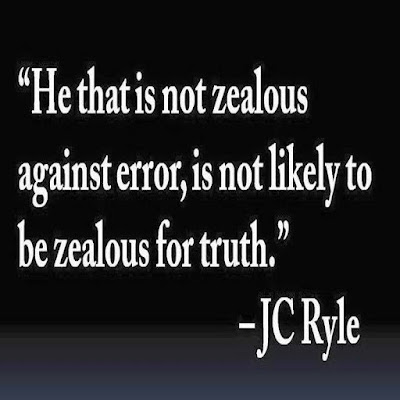 But do you know what is even worse, much worse! When someone contacted Pastor Redlin to warn him about me, Redlin lied and claimed that they found my websites when someone tried to contact me, but they did have my contact information. I know he lied, because their church had just mailed me a welcome letter the week before (and that's the last I ever heard from Campus Church again, to their utter shame). They did in fact have my contact information. Jeff Redlin is a liar! God knows I speak the truth. Redlin took the inappropriate liberty to critique my website ministry. I had never shared my ministry with him, because it is none of his business, but he criticized my work anyway. So now I am taking the liberty to critique his Satanic ministry! Anyone who requires your behavior to change to prove you are saved is preaching ANOTHER GOPEL, and that is of the Devil.

These ungodly men love money, plain and simple. Luke 16:13, "No servant can serve two masters: for either he will hate the one, and love the other; or else he will hold to the one, and despise the other. Ye cannot serve God and mammon." They would never admit to such a shameful and sinful thing, but they are in denial. Evidence of what I say is the fact that Jeff Redlin chose to side with doctrinal error, instead of uphold the truth. Evidence of what I say is that instead of Pastor Redlin complimenting my contending for the Christian faith, he criticized me for it, false accusing me of "finding weaknesses" in preachers. Folks, when a man preaches another gospel, that is not a "weakness" it is DAMNABLE HERESY!!!

One of the biggest lying and dangerous false prophets today is the executive president of Bob Jones University, Dr. Steve Pettit. Look what this wicked lying man preaches!!! Here is a backup article if the first doesn't work for some reason. This dangerous lying man needs to be exposed for his false gospel. Whereas the Bible commands in Titus 1:10-14 to "REBUKE THEM SHARPLY," who corrupt families with deadly heresy, Pastor Jeff Redlin sinfully bids Godspeed to them. 2nd John 1:11, "For he that biddeth him God speed is partaker of his evil deeds." How dare Jeff Redlin criticize my faithfulness to contend for the faith, while he sinfully goes along with the counterfeit gospel of Calvinism being preached today throughout the apostate Bob Jones camp!!! SHAME! SHAME!! SHAME!!!

Why isn't Jeff Redlin doing what I'm doing... STANDING FOR GOD??? Do you realize that Steve Pettit and the BJU camp today are espousing the SAME demonic false plan of salvation as Seventh-Day Adventist (SDA) false prophetess' Ellen G. White? It is true! They all preach the Devil's false gospel of Lordship Salvation. Miss Ellen White teaches, as does all of SDA today, that you must keep the Ten Commandments to get to Heaven. SDA's believe that your love for God is proven by obeying His Ten Commandments. Although that is true (John 14:15), SDA's make the fatal doctrinal error of attaching love with faith. So in SDA (and you can read their official doctrinal positions to easily verify this), if you don't keep the Ten Commandments, they say your lack of love proves that your faith is not genuine, and you are not really saved.

Folks, this is EXACTLY what the Bob Jones camp are preaching today. Listen to Pastor Chuck Phelps for yourself, a big name in the Bob Jones University camp. Marty Herron is a devil-dog preacher in Ankeny, Iowa, an infidel who is corrupting thousands of young people with his counterfeit repent "OF YOUR SIN" heresy. One key phrase that I hear a lot in the Bob Jones camp is that "you must do good works to prove the genuineness of the reality of your faith." That is bullcrap! Friend, the evidence of the genuineness of your faith is FAITH ITSELF!!! God does not require anything more of you to get to Heaven.

I am sick of today's lying preachers, who claim that God's gift of salvation is by grace alone—but then once you receive it by faith they require you to forsake your sins, follow Christ, faithfully run the Christian race, exchange all that you are for all that Christ is, and obey Christ until the end—or else they say your faith is not real and you were never saved at all. LIARS EVERY ONE!!! That is the SAME garbage that Ellen G. White preached. Get right with God Jeff Redlin!!! Get right with God Campus Church!!! Get right with God Pensacola Christian College!!! The Bob Jones University (BJU) crowd must be exposed, because they are corrupted, preaching another gospel which is not of free grace!!! Email ThisBlogThis!Share to TwitterShare to FacebookShare to Pinterest
Labels: Titus

Are There Two Gospels?

Romans 4:5, “But to him that worketh not, but believeth on him that justifieth the ungodly, his faith is counted for righteousness.” Are the...

Sword Of The Lord

I Never Knew You