Revelation 20:15, “And whosoever was not found written in the book of life was cast into the lake of fire.” Revelation 21:8, “But the fearful, and unbelieving, and the abominable, and murderers, and whoremongers, and sorcerers, and idolaters, and all liars, shall have their part in the lake which burneth with fire and brimstone: which is the second death.”
The Holy Bible is very clear that eternal damnation does exist. Hell is real. All Christ-rejecters whose names are not found written in the Lamb's Book of Life will be cast by the angels into the everlasting Lake of Fire to suffer and burn day and night without rest in torment, suffering the wrath of an angry God. The Bible could not be more clear.
Yet, a false prophetess named Renee Roland on YouTube has been boldly denying the existence of eternal damnation for several years. Renee needs to be exposed as a false teacher!
One of my faithful web visitor wrote to me today, insisting that Renee Roland is one of few believers who still faithfully preach the true Gospel on YouTube. Here is the stern reply that I sent to him:

Kindly, she [Renee] doesn't preach the true Gospel if she denies that eternal damnation exists. Without a burning Hell there is no reason for the cross of Jesus Christ. She is corrupt in her thinking and a false teacher who needs to be exposed. I will never support nor recommend her YouTube channel to anyone. I am sorry that her house burned down. It is important to keep these two issues separate.
Her house burning down is awful. But she has thousands of people following and agreeing with her that Hell doesn't exist. The Bible says in Romans 5:9, "Much more then, being now justified by his blood, we shall be saved from wrath through him." If there is no Hell then where is God's WRATH?
I feel sick that her house burned down, but maybe this is God's way of opening Renee's eyes that Hell is real.
Kindest regards

Perhaps some people think it harsh of me to criticize Renee's false teaching at a time when her house just burned down and she is hurting emotionally, but dear friend, billions of people are ready to perish into an everlasting Lake of Fire and Brimstone the Bible says. Jesus warned everyone in Matthew 7:13-15, “Enter ye in at the strait gate: for wide is the gate, and broad is the way, that leadeth to destruction, and many there be which go in thereat: Because strait is the gate, and narrow is the way, which leadeth unto life, and few there be that find it. Beware of false prophets, which come to you in sheep's clothing, but inwardly they are ravening wolves.” Jesus said that “MANY” people are traveling down the highway which leads to destruction. When the popular rock band AC/DC performs their iconic song, “Highway To Hell,” they mean it!
Sadly, Renee Roland is one of those false prophets Jesus mentioned in Matthew 7:15, those ravenous wolves who come to us wearing sheep's clothing. I am not trying to be mean, insensitive or unkind, God knows my heart. I am simply using this tragedy to draw attention to the reality of a burning Hell for all people who die in their sins without Christ as their personal Savior. Hell is real. As a Baptist preacher I use anything I can find to convey truth to people, because I love others and don't want anyone to go to Hell forever (2nd Peter 3:9). 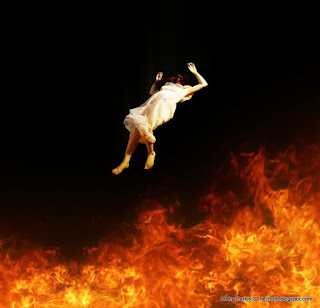 Hell Is Real And Forever!!!
If God allows people's homes to burn down, and for some to die in a fire, then why is it so hard to accept that people will suffer in eternity? As a student of religion, I am very familiar with the different pseudo-Christian cults. The Jehovah's Witnesses and Seventh-Day Adventists deny the existence of a burning Hell. These damnable religious cults have been leading people into the fires of Hell throughout the 20th century and still today.
According to a George Barna poll, 76% of Americans believe that Heaven exists, but 71% don't believe that Hell exists. Of those polled, only 32% believed that Hell is a literal place of suffering and torment. Only .05% (1 in 200 people) believed that they were personally going to Hell. Is it any wonder why the Gospel (the seed of God's Word - Luke 8:11) has fallen upon stony ground (Luke 8:12), so that few people are coming to Christ anymore to be saved? If there is no eternal damnation then there is no need for the Good News of Jesus Christ crucified, buried and risen! Why would you need a Savior if there is no threat of damnation?
I am truly sorry that Renee's house burned down. I can understand her tears and feel of loss, because a lot of living went on in that house over the decades. I once had my car stolen and I wept when I found it all smashed up at the city pound after some hoodlums stole it. I cried. The man who ran the lot at the city dump in Chicago said to me, “It's just a car.” I replied, “You don't understand, a lot of living went on in that car. I took my family to the Wisconsin State Fair in that car. We went out to eat and to the zoo in that car. I drove my mother to the hospital in that car in 1989 when she had a crippling stroke and never walked again. I took my family to church each Sunday in that car. So, no, it's not 'Just a car'.” Surely, losing a car is not the same as losing a house, but I do understand the sentimental feeling of loss that Renee is experiencing right now, to some degree.
Dear reader, there is no sin as horrible as denying the truth of eternal damnation for the lost. The Gospel loses it's power when there is no risk of eternal punishment. It is ridiculous for Renee to preach the Gospel, while at the same time denying the existence of a burning Hell where lost sinners are tormented by God for eternity. YouTube is a cesspool of heresy and damnable false doctrine. In her most recent video, Renee says while crying: “I know God is somehow going to use this for good.” It is my sincere prayer that God will use this tragedy to open Renee's eyes to the reality that a burning Hell DOES exist.
I am not berating Renee during her time of calamity, I am drawing attention to the reality of Hell which she wickedly denies on YouTube. If you go look at her video (one of many) in which she denies eternal damnation, you'll see that her video has received 8,355 views and has received 1,151 comments! Renee is making an impact for the Devil. This is exactly why the Bible forbids women preachers, because like Eve they are easily prone to doctrinal deception. The GOOD NEWS (Gospel) is worthless if there is no BAD NEWS! The bad news is that you are a dirty, guilty, sinner deserving of eternal damnation!!! And if you don't get saved (if you haven't already), you will be tormented in the fires of Hell for ever and ever without rest or hope!!! Psalms 9:17, “The wicked shall be turned into hell, and all the nations that forget God.”
Again, I am sorry that Renee's house burned down, but billions of people are going to spend eternity burning in the fires of Hell. Renee boldly denies this Bible truth. She makes light of THE TRUTH. RIGHT DOCTRINE MATTERS!!! I am sick and tired of foolish web visitors who tell me how great Renee Roland is because she is one of few people who gets the Gospel right. Dear friend, if you get the BAD NEWS wrong, the GOOD NEWS doesn't make any sense!!! What would be the benefit of being acquitted in a court of law for murder, if there were no punishment imposed for committing the crime? The reason why people weep and cry with joy when the jury acquits them of the offense of murder, is because they were facing life in prison without parole or death if found guilty and convicted! The BAD NEWS makes redemption the GOOD NEWS! The GOSPEL cannot be the “GOOD NEWS” if there is no BAD NEWS!!!
Kindly said, Renee is a loud-mouthed woman preacher who is woefully ignorant of the Word of God. The Gospel is ineffective to save anyone who doesn't think they are sinful enough to deserve to be punished in Hell forever. I didn't say that, God did! Romans 6:23, “For the wages of sin is death; but the gift of God is eternal life through Jesus Christ our Lord.” God freely offers us His gift of eternal life. Why? Because by our own sins we have earned the wages of sin, which the Bible says is DEATH. We all deserve Capital Punishment in God's justice system, and if you die in your sins you WILL spend eternity without end being tormented in fire and brimstone (Revelation 21:8), mercilessly day and night without rest (Revelation 14:11). Do you really think that God is less righteous than man? In this temporary life men punish evildoers, so do you think God doesn't? A BURNING HELL EXISTS!!!
at October 13, 2021

Email ThisBlogThis!Share to TwitterShare to FacebookShare to Pinterest
Labels: Revelation